Ek = Symbol = Energy Kinetic = The mother of objects in Motion
Sim Racing = A way to simulate real conditions of car racing as closely as possible
EKSIMRacing = A foundation (nonprofit organization) creating software dedicated to sim racing and its community for over a decade.

After 2007 the creation of EKSIMRacing and for over a decade EKSIMRacing has been involved in several amazing public software and hardware projects related to sim-racing and custom engineering, hardware design and racing motorsports software development.

All projects have been done with passion and enthusiasms with fantastic people working for building great new hardware devices, improving driver or firmware for better performance and stability of hardware, improving API of their game/simulation to add telemetry data or using VR set to increase greatly the user experience and immersion, adding and integrating new sim-racing services in the world, managing actuators to create dedicated motion platform, etc.

SLIMax Manager Pro and MotionMax Manager software (the advanced software for managing racing display USB devices, virtual racing Dash emulator for PC, Android and Linux and 2DOF, 3DOF, 4DOF to 6DOF PRO car racing simulator) are a big part of our public sim-racing projects, below, the most important milestones for over a decade resulting from the creation of these software.

EKSIMRacing your invaluable source of sim racing innovation is still running for you today for the benefit of the sim racing community. More exiting sim racing projects to come, stay tuned… 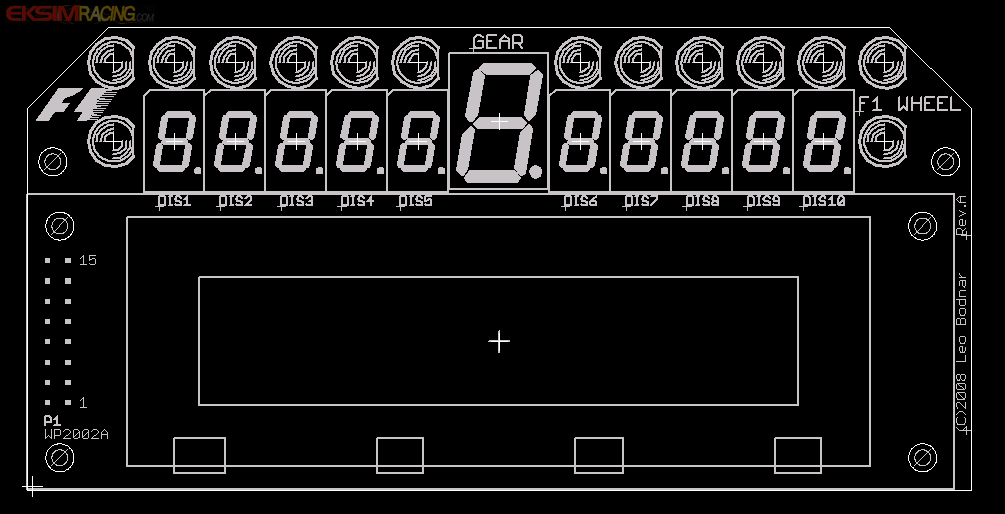 Leo Bodnar released the F1Wheel racing display and we started the development of a software for PC (F1Dash) to manage the display with several simulation like rFactor, LFS or Simbin titles. 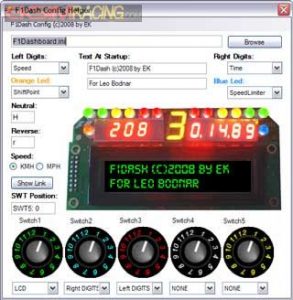 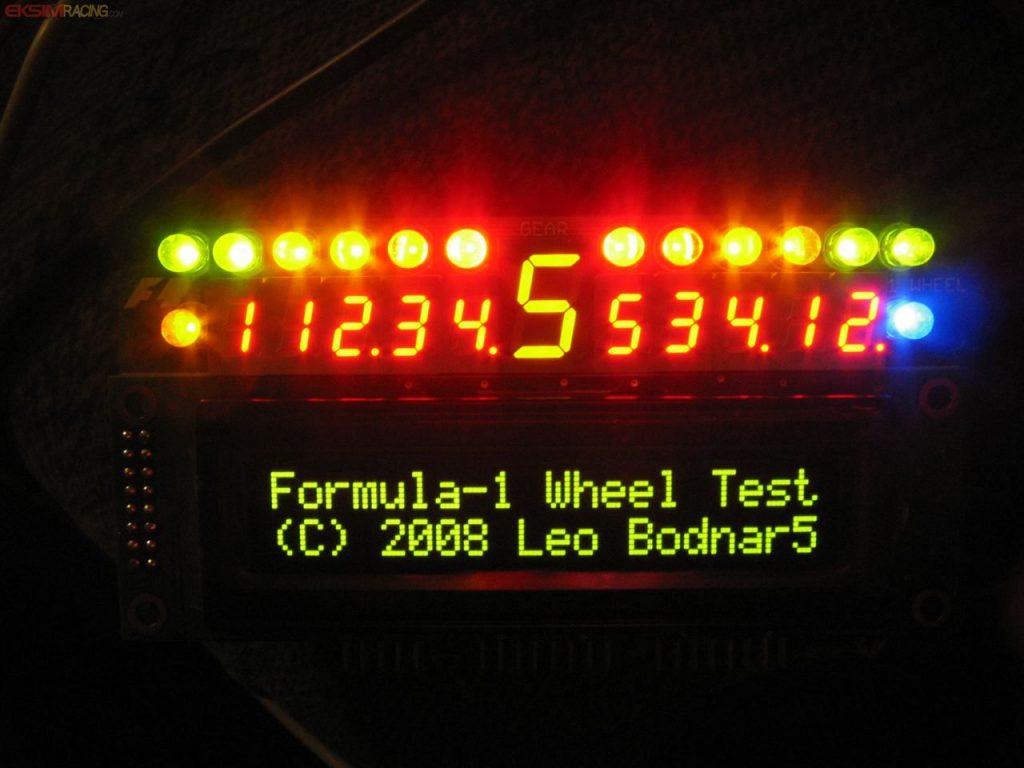 The first racing display available with LCD for the sim racing community. This project was quickly discarded (the LCD was not reliable) in favor of the new SLI-M display (SLI = Shift-Lights Interface).

F1Dash and Plugins For SLI-M (discontinued)
F1Dash apps/plugins series continue with the support of the new SLI-M display, iRacing support added to the software this year as well.

After the SLI-M we started to work with Leo Bodnar on a completely new USB Device display….

Mon, 12 Oct 2009
First Test of prototype of SLI-PRO, dots are not yet reversed

SLI-PRO was released to general public in November!
This is the beginning of the most successful racing display ever made for sim racing community. 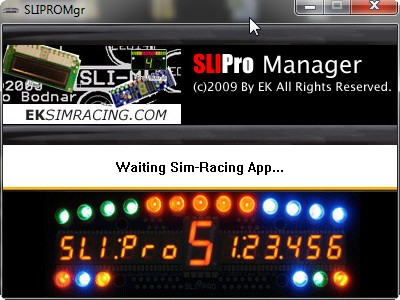 Following the release of the SLI-PRO usb device, SLIPro Manager beta is released and dedicated to the SLI-PRO device display. 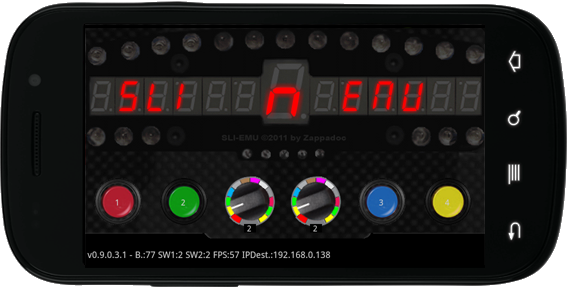 The year of the creation of the virtual racing display “EMUlator” of the SLI-PRO for Android during the development of the famous SLI-PRO device display.
SLIEmu was the first virtual racing dash available in the world for Android with a mini buttonbox integrated (4 virtual buttons and 2 virtual switch 12 positions) and was created primarily to test the software before the availability of the device itself. This first gen emulator SLI-EMU is still working with SLIMax Manager Pro and available for download today.

EMULATOR: A racing dash emulator is NOT a simple graphics application but a software that emulates the FIRMWARE of the real usb device display. 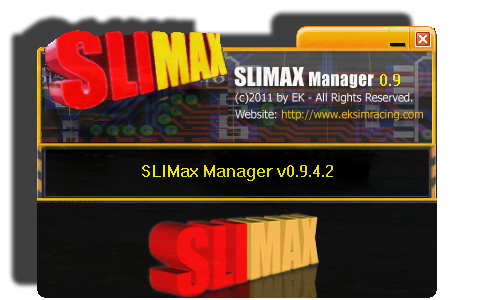 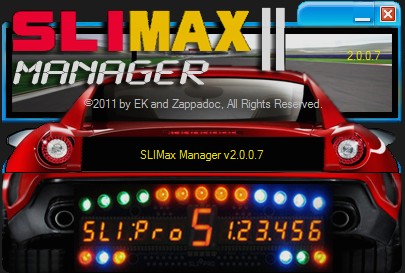 The beginning of a great collaboration with Codemasters F1 dev team

2012 is the beginning of a great collaboration with Codemasters F1 dev team to improve the Codemasters API. The API v2 of the F1 2012 title was already a great improvement. Additional telemetry data with a full backward compatibility have been added each year before each new release of Codemasters F1 game until F1 2017 (API v5).
In 2018 Codemasters F1 Team had introduced a completely new API (v6) for its F1 2018 title which goes even further, beyond all expectation. A great and stable API for your racing displays and virtual dash and motion platform obviously fully supported by EKSIMRacing software.

SLIMax Manager II
This was a big improvement of SLIMax Manager with a new internal plugin architecture to take into account the new upcoming game/simulation and hardware equipment (simulator system and other LCD/Shiftlights devices) and a new UI based on skins. 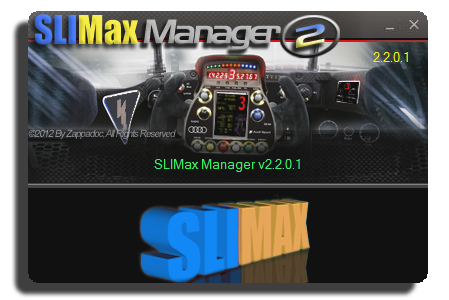 [2013] The beginning of our partnership with SIM Display

The beginning of our partnership with SIM Display

In partnership with SIM Display we started to work first to improve the existing firmware and then on design of several usb display devices during those years to add the full support of the displays to SLIMax Manager and later to SLIMax Manager Pro. 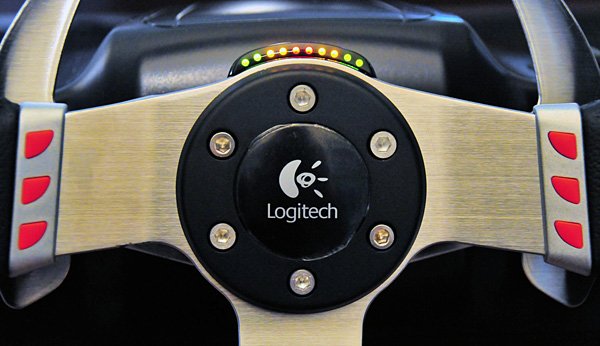 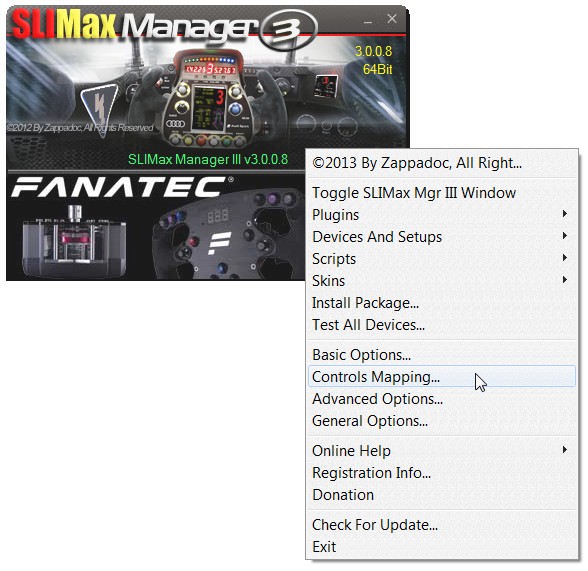 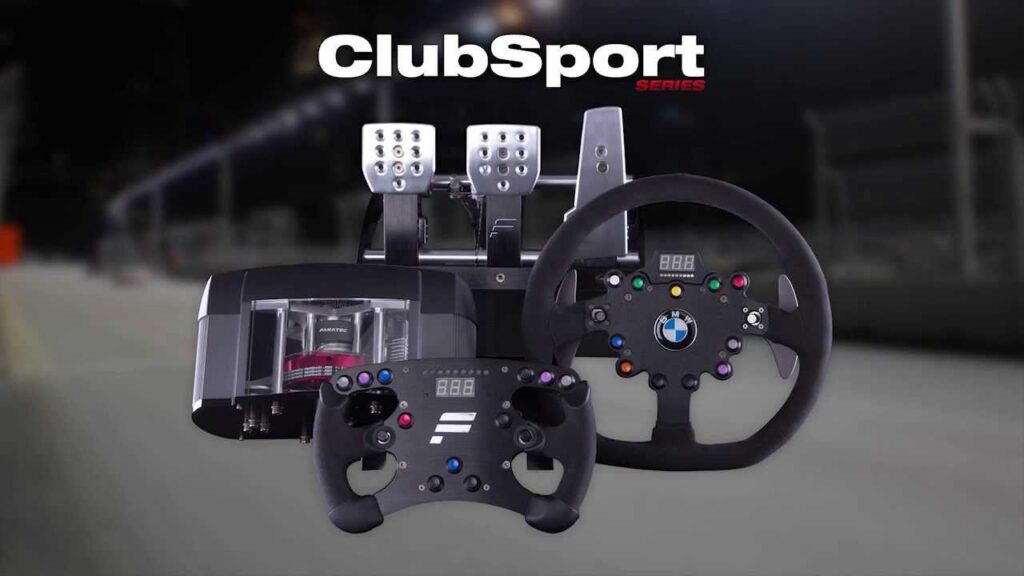 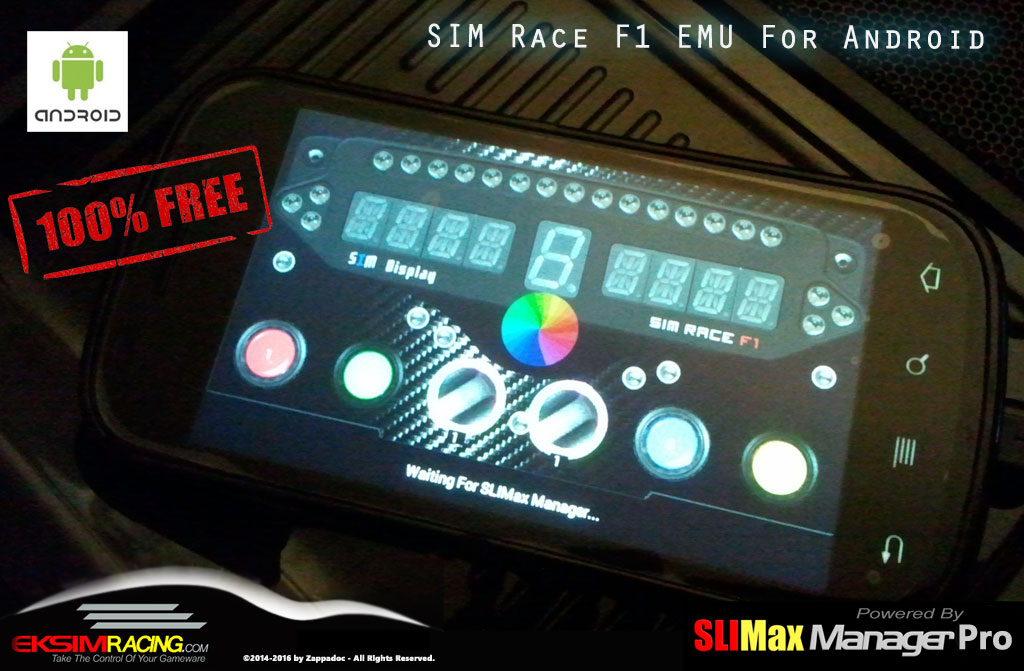 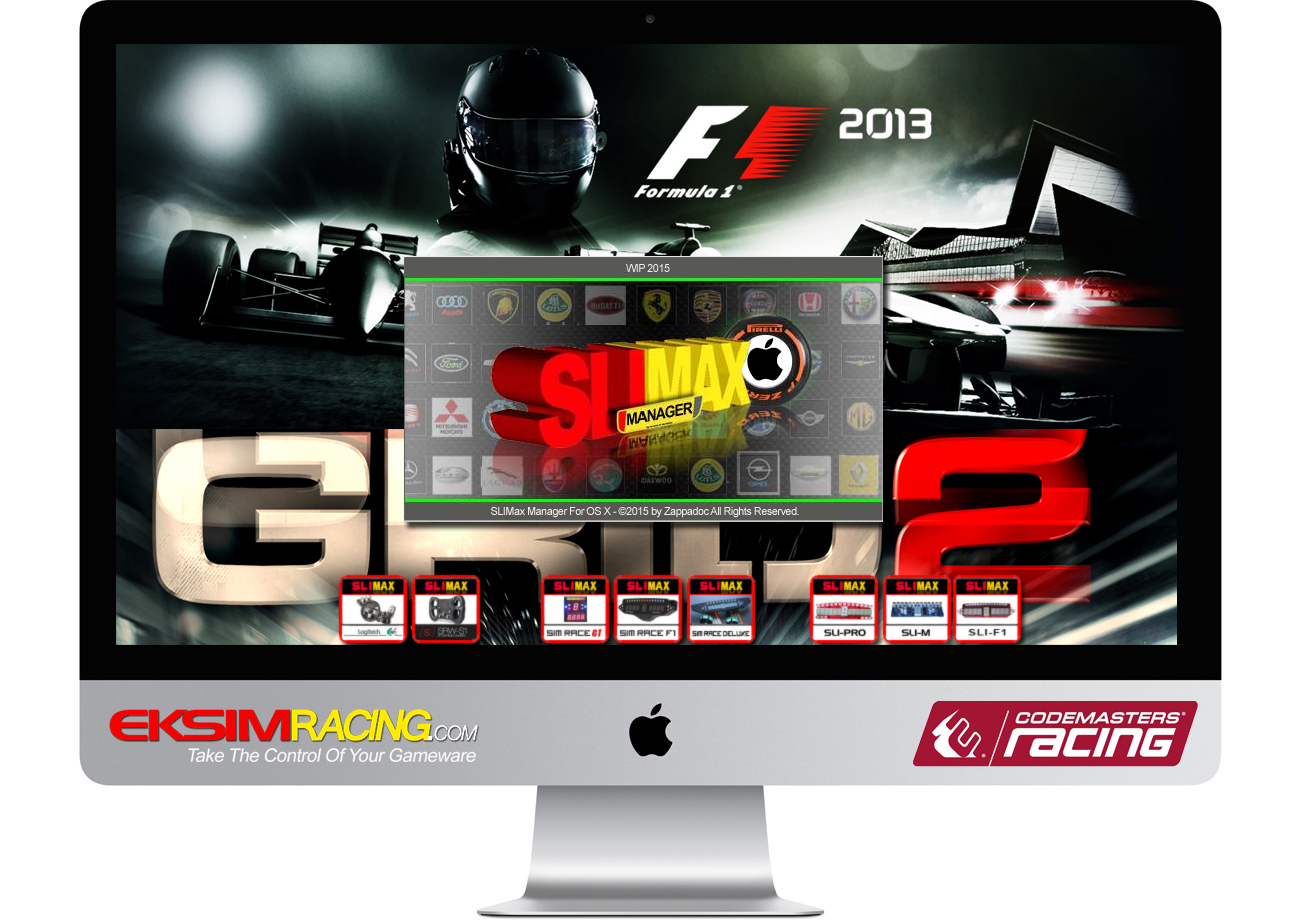 Project of a 2DOF to 6DOF Motion platform manager software dedicated to PRO Racing driver has been started in 2015… and took 2 years of development to be completed. 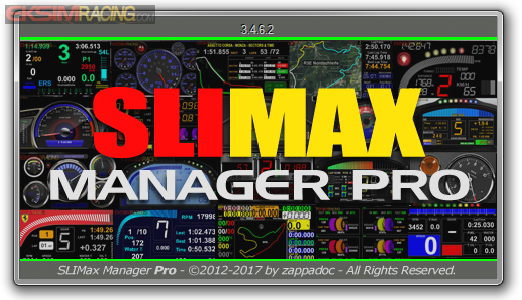 First release of the Virtual Racing Dash Emulator for Android, Windows and Linux.

The second gen EMUlator of virtual racing display has been released this year.  Based on the firmware of SIM Race F1, VDASH-EMU is an huge improvement compared to first gen EMU with high quality graphics rendering (OpenGL 2+ based) and high performance and hundred of telemetry data available (depending the game API), with 44 pages for customization for your dash and up to 4 EMU running at the same time at full speed. 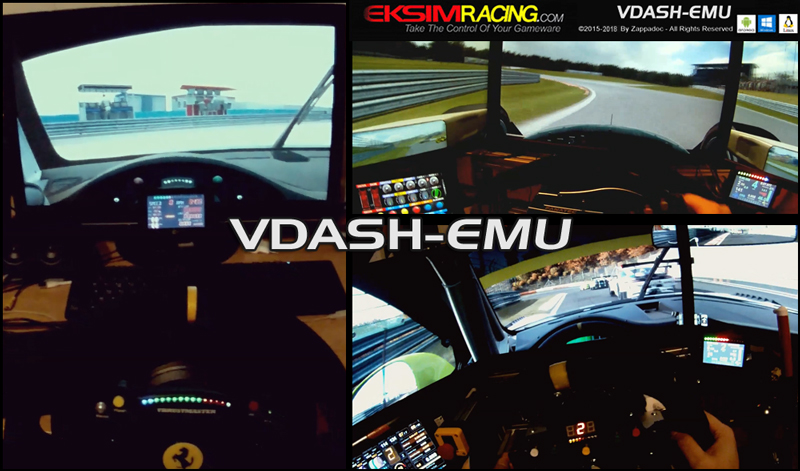 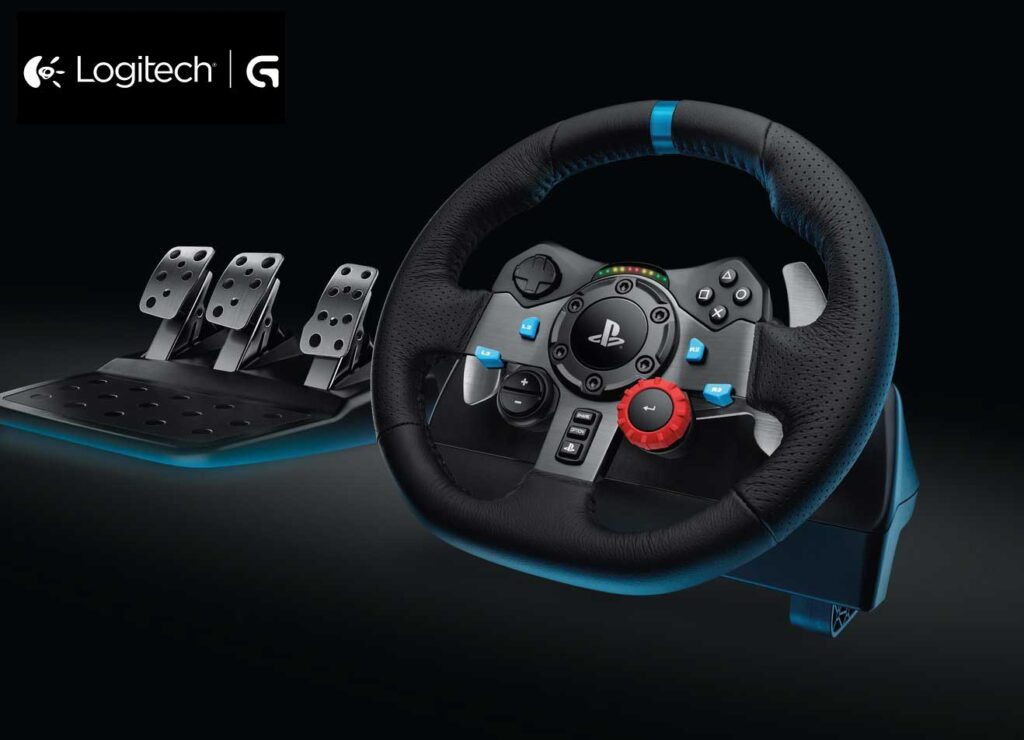 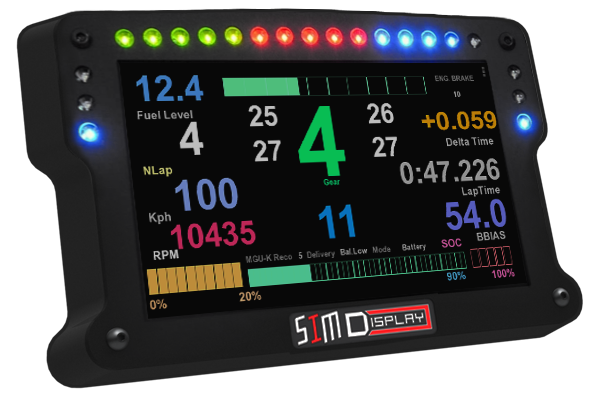 A full “New F1 style” display device with LCD has been released this year. A special version of VDASH-EMU for SIM Race LCD has been created to be able to customize your racing dash (up to 48 displays usable with more than 60 games/simulations). 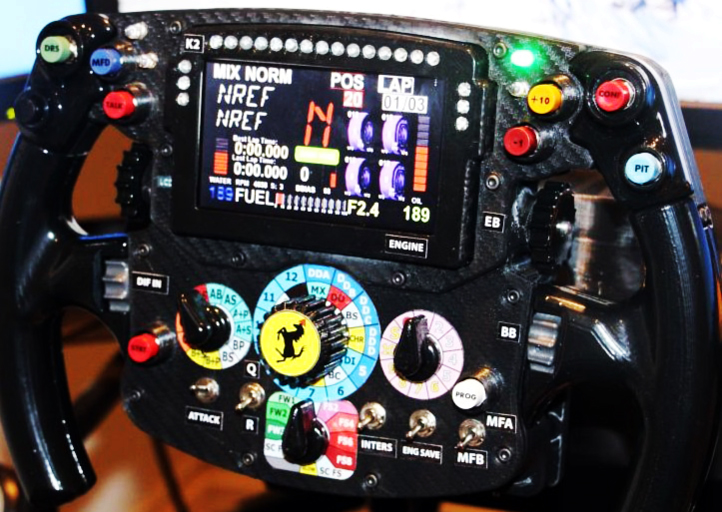 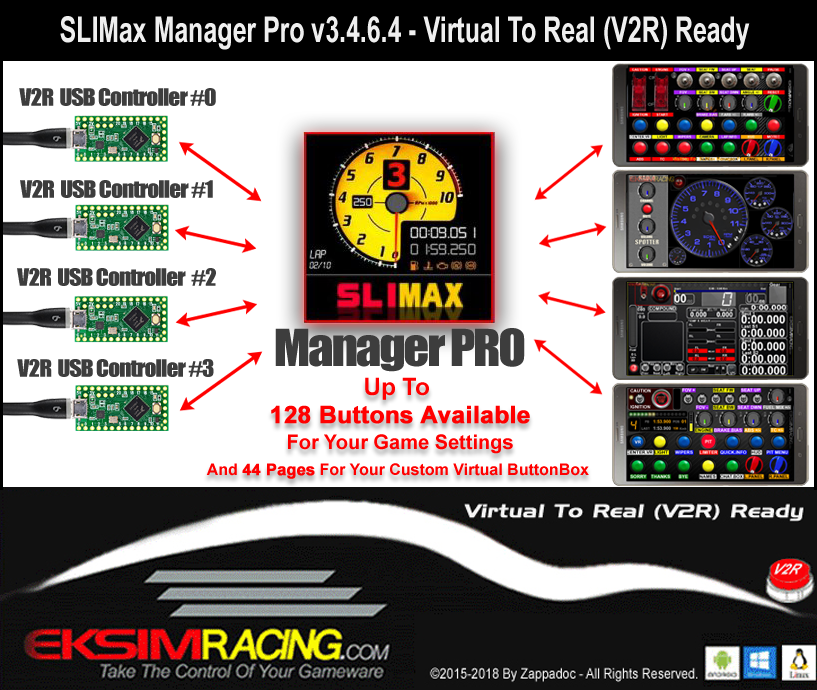 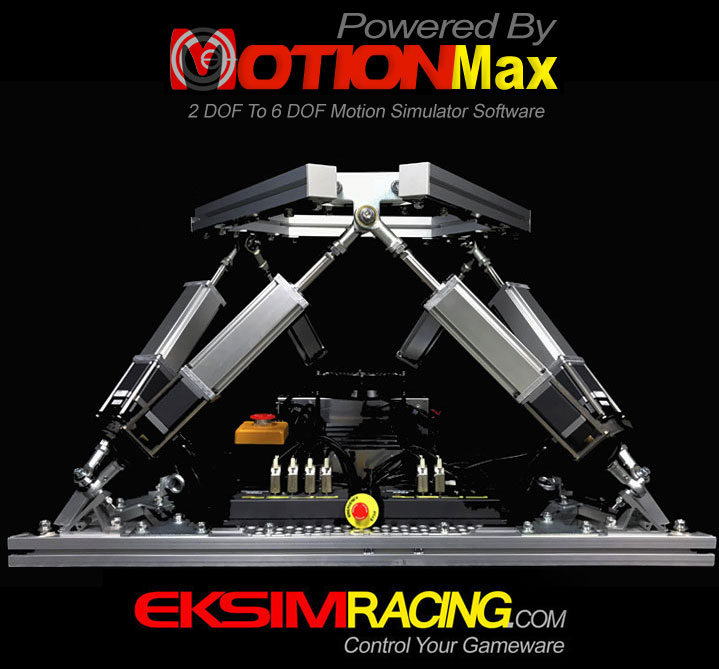 A special version of MotionMax Manager to manage the FREX 6DOF Simulator has been released in 2018 after 2 years of R&D and development. 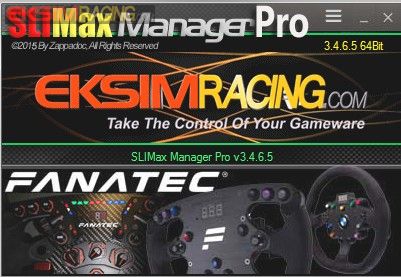 SLIMax Manager Fanatec Edition (discontinued use SLIMax Mgr Pro instead) a powerful, easy to use and 100% free declination of SLIMax Manager Pro but dedicated to Fanatec Hardware racing ecosystem. 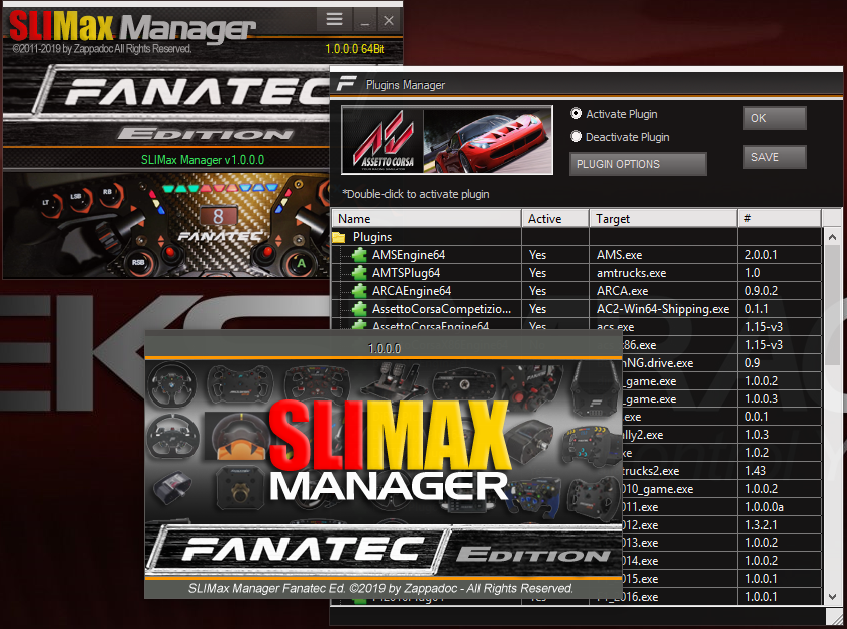 SLIMax Manager Pro v3.4.6.6 has been released with the addition of the support of the USB Fanatec Conversion Kit from Leo Bodnar (which is a complete new device management not related to native Fanatec hardware) 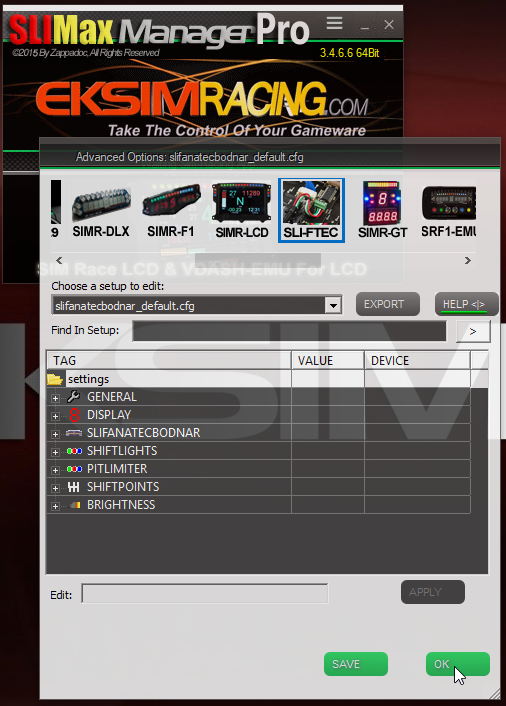 April, 2019 the month we introduced the MotionMax 5 software* (full support of 5DOF simulator software)
MotionMax 5 is a more conventional 3 to 5 DOF simulator management than the MotionMax 6DOF software with 3 distinctive layers, the CORE layer (Pitch, Roll, Heave), the SURGE layer and the Traction Loss (TL) layer.

*MotionMax 5 suitable to all “4 legs” simulators are not enough realistic for car racing simulation, are not recommended. the software has been discontinued (since Dec. 2019). We are now focused on 6DOF and 2DOF+TL+SURGE. 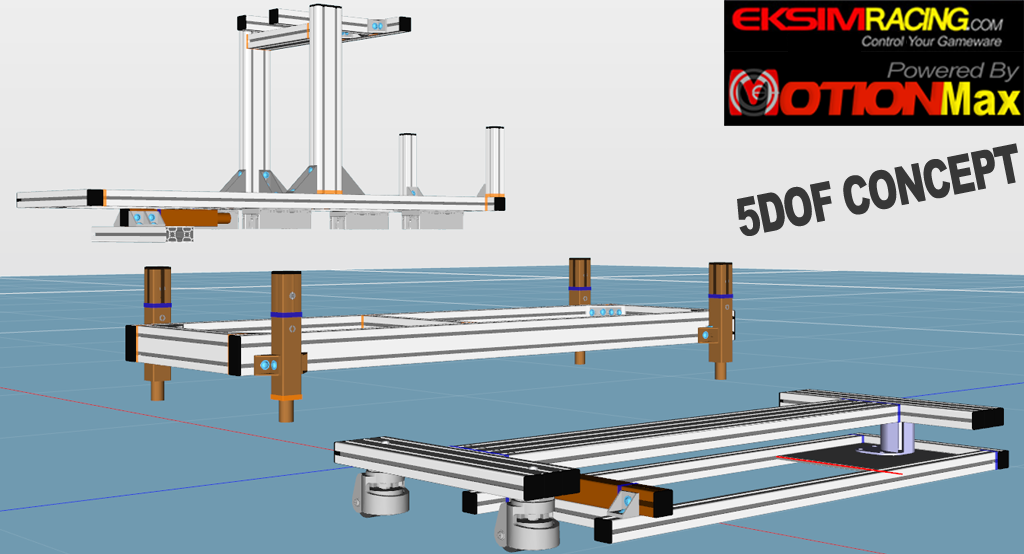 Nov. 2019
MotionMax 6 DOF and 2 DOF SCN Edition Early Access has been released.
MotionMax 2  is a more conventional  2 to 4 DOF simulator management than the MotionMax 6DOF software with 3 distinctive layers, the CORE layer (Pitch, Roll), the SURGE layer and the Traction Loss (TL) layer. 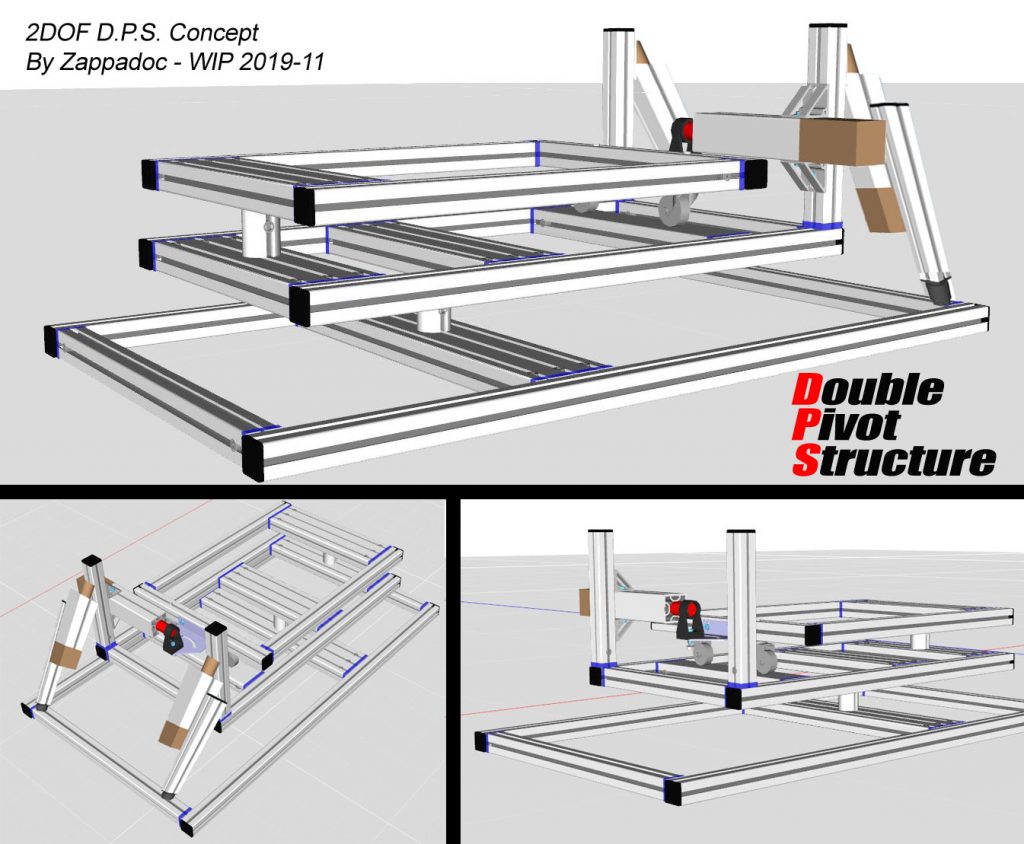 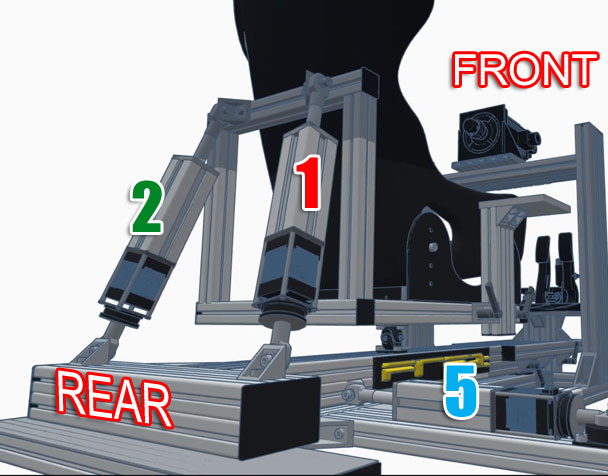 Industrial concepts of motion simulator 6DOF and 2DOF+TL (traction loss system) have been designed by Zappadoc this year 2020 to be powered by MotionMax Manager software with Dyadic SCN6 actuators.

After months of development and tests by Zappadoc and EKSIMRacing team, all info to create a PRO car racing motion simulator are finally disclosed to everyone for the benefit of the sim racing community under CC BY NC SA creative common license (strictly prohibited for commercial use). 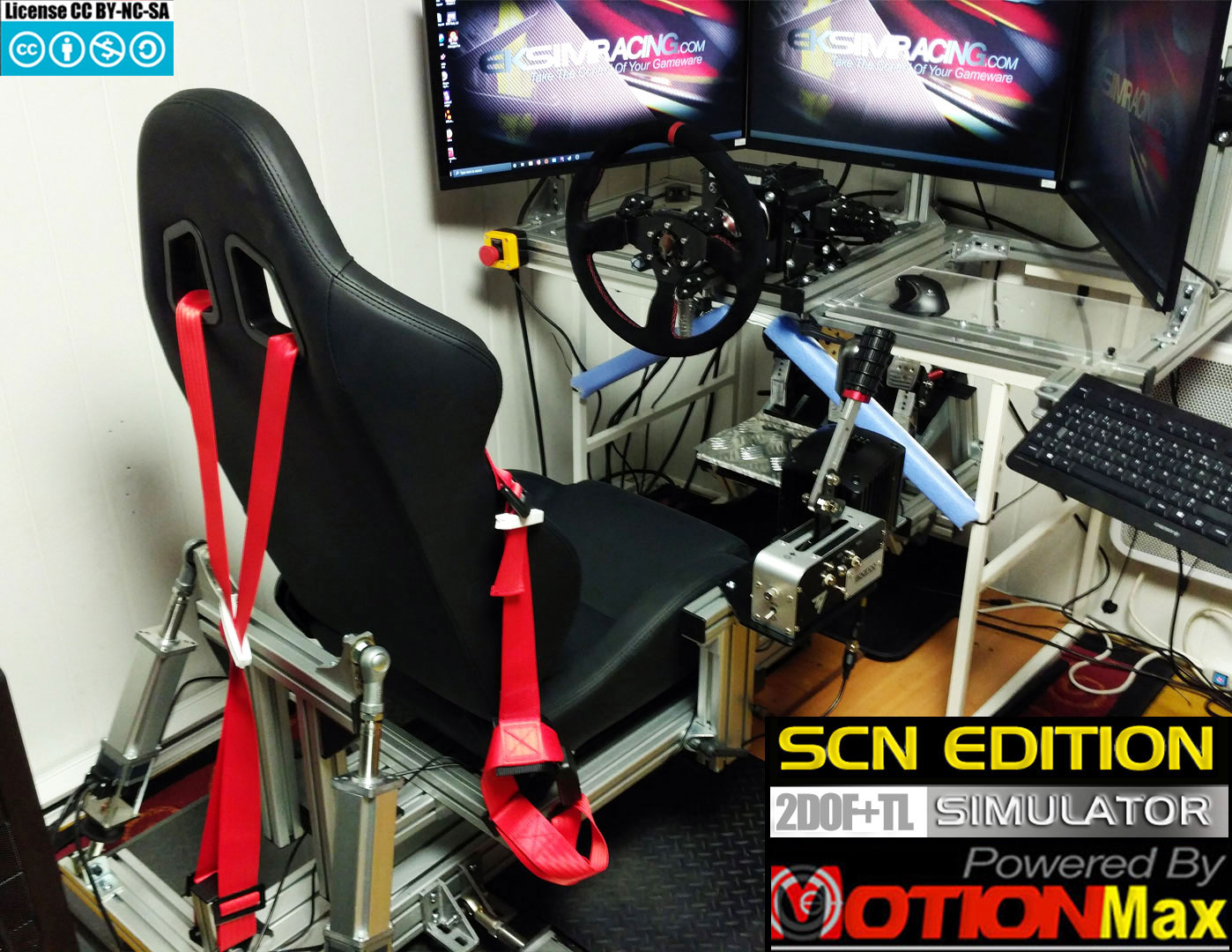 They use the latest generation (2021) of Virtual To Real (V2R) technology.

V2RButtonBox is a powerful REAL TIME virtual button-box running on large Android or Windows table and using the 2nd generation of V2RBox technology to be usable like a REAL (physical) button-box and compatible with ANY game or software using joystick inputs (buttons, encoders, axes).

A dedicated website to V2RBox Technology has been created https://www.v2rbox.org 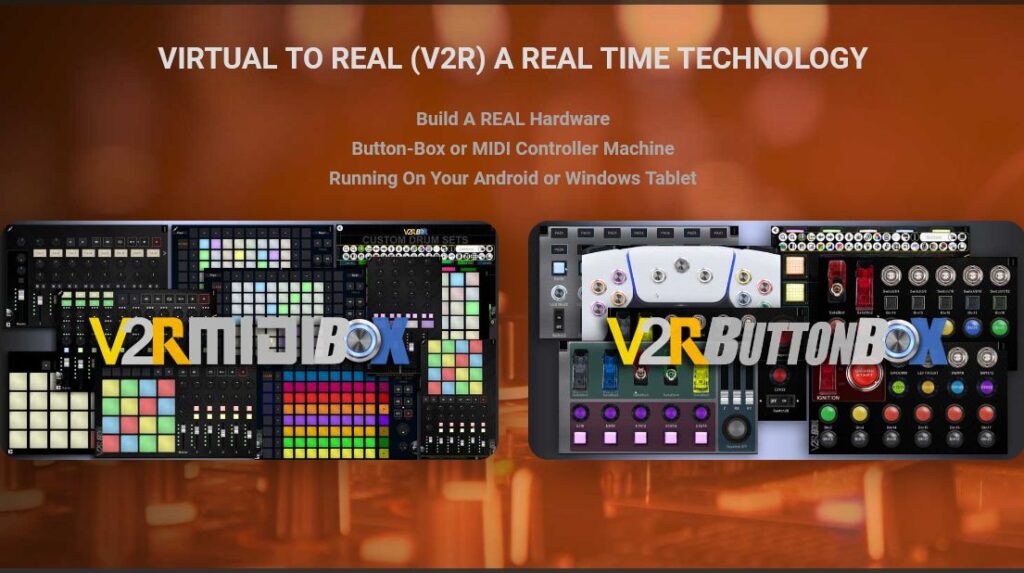